I Will Blend No More Forever – Part IV

Successfully sweeping the oddly behaved star under the rug, I proceeded with my new writing career unperturbed. In other words, I started procrastinating. This resulted in very unlikely and unexpected intervention, dealt to me by a refugee from the Elizabeth Arden Beauty Salon in NYC, and then by Saint James.

Enter, stage left, Queen Dee. Regal, well-dressed, a bit hard to handle and very commanding, in swept the refugee from the Elizabeth Arden Beauty Salon and the next preparatory ET encounter of the very weird kind.

Queen Dee was a psychic from New York City – Manhattan, of course. She dressed fashionably always, as if she were still in Manhattan. Her attire didn’t quite fit her current surroundings, but I think she would dress that way even if she went camping.

Somehow Queen Dee was catapulted some 1983 miles from Herald Square in midtown Manhattan to Obscureville, Western Territories, Under the Radar, USA. The way she told it, it sounded like an alien abduction. She claimed she was practically snatched by some unseen force right out of the Elizabeth Arden Salon during her weekly facial, while wildly screaming, “You mean you want me to go to a place that doesn’t even know what a facial is???” (The Queen also had a flair for the dramatic.)

However the arrow was shot and by whatever force shot it, it landed exactly on its target, and right at my feet. Any encounter with the Queen was life-changing, and my life was no exception.

I’ll get back to this one later…. 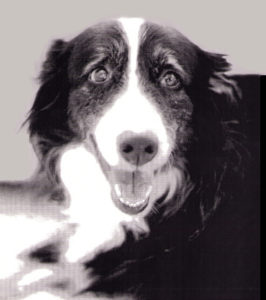 Next, meet my dog. Her name is Saint James. She chose that name. I swore that would be the last time that I permitted a puppy to name itself. That strange choice led to multiple problems, such as screaming outdoors at night in a largely devout Catholic neighborhood, “Saint James, you get your ass in here right now, do you hear me?” This was not a politically correct move even though it happened well before people were politically correct. It still didn’t go over very well.

This dog was very different right from the beginning. She adored flowers, preferred frilly things such as lace or chiffon to lay on, loved perfume, and would go into a near faint over bonbons. In short, the dog was French, possibly straight out of the court of Louis Quatorze in her last previous incarnation. That would certainly explain her demeanor and decorum.

Aside from her strange, not very doglike behavior, she was also wickedly smart. She picked up commands easily, such as: come here, sit, lay down, give me your right paw, give me your left paw, etc. Befitting her French temperament, she would sigh with an air of ennui, while I tediously taught her basic dog instructions.

However, one day she showed me how much she had taught me without me even noticing. She went to the door and stood there like she wanted to go out. I opened the door and she just kept staring at me until I got that she wanted me to go out. I did. She then went up to the car door and stared at it until I followed her and opened it. She got in. Through the window she looked at me and then looked at the steering wheel and then looked back at me, until I acquiesced and got into the driver’s seat. She then gave me a mental command to start the car and take her for a ride around the plaza so she could stare at people as they passed by.

Damn. I had taught her maximally seven stupid dog tricks, and she conversely had taught me an intricate series of commands to get me to do exactly what she wanted under any circumstance. She had completely trained me and I had failed to notice it until that day.

Besides that, how many dogs just want to cruise around observing people from a car window, taking note of human foibles? I concluded that perhaps she was only pretending to be French, and all that Louis-Quatorze stuff was just a cover, kind of like the Coneheads on Saturday Night Live. They pretended they were from France too, didn’t they?

I now had to reconsider my dog’s French heritage and entertain the thought that she was really an ET in a dog suit, here on assignment, tasked with probing the indigenous population and sending back streams of information to the transport station at the Arcturian gateway. I joked about that then, but soon found out I was very close to the truth.

I’ll get back to this one later, too….

Diana Luppi ~ Zoev Jho wrote the underground sensation, ET101 The Cosmic Instruction Manual, over 25 years ago. It has created an enormous ripple over the years, and is now making a galactic “comeback”. Translations in many languages are being prepared, as the “new wave” hits the shores.
Read More About the Author Here

You have Successfully Subscribed!

Get Your Beret Now